Life is full of winners, losers and keepers. Five years ago I decided to apply this test to my friends and relatives. The inspection and subsequent fallout was a revelation. The winners:

1. My children. I looked at them as people and decided yes, they’ed be keepers even if they weren’t mine. However, I decided that I had finished raising my 29-year-old daughter who was still living with me. So I moved. To another state.

2. Rosie. She was demanding, loved to do imitations of people we knew and generally engaged in outrageous behavior. During prayer services, she would look around to see whose eye she could catch and then blow them kisses. She flirted with everyone from 6 months to 99 and her humor and mirth were utterly irresistible. She has passed on and I learned from her to relate to people of all ages. It has enriched my life. When I think of her I smile and pray that God wasn’t looking while she flirted during prayer services.

3. My free range chicken supplier. While I decided the chickens were too expensive, her friendship was a bargain. She turned out to be a kindred creative soul and there was another bonus: her talented husband wrote the music to and sings the “Forty Days” song.

4. Everyone else that is not listed under losers.

The winners are also the keepers.

And, ta da the losers:

1. A bi-polar friend who usually refused to answer the phone when I called. He often called me, though. And his timing was impeccable.  The phone would ring just as I was slipping into bed and he demanded that I stay on the phone with him because he wanted to talk. I would try the bathroom routine – you know – I gotta pee. Gonna say good night. His answer, “I’ll hang on til you come back.”

2. Husband number 4. When we were geographically separated he would call constantly to find out what I was doing. Hello–I don’t think marriage is a jail house. (Husband number 5 lives in another country and he never calls and says, “Where are you?” He just keeps telling me I am beautiful, my writing is beautiful and my paintings are beautiful. He came later but he is definitely a keeper.)

3. The friend who was the co-author of an advice column for my local, monthly newspaper. One weird problem; two answers. But truthfully, I didn’t get rid of her. She decided I wasn’t worth keeping. After following her advise to always print reader letters, she was angry that I printed one that criticized her answer.

4. My newspaper. Too much work and not enough money. Now I deal with tenants instead and I have to decide which ones are losers and which ones are keepers. If I ever find out who was the person that required another tenant to put up this sign– that’s a loser.

5. The tenant who tells me he left for work at 5 in the morning and didn’t come home til 11pm demands that I pick up his rent check–he can’t get to the bank and refuses to use his bank bill payer. The mail? He can’t afford a stamp, he says. He ends every conversation by telling me I am his only friend in America because I went to court for him in a custody case with his ex-wife. I’ve decided to keep my sanity by picking up an old love that I haven’t engaged in since B.C. (before children). See my watercolors below: 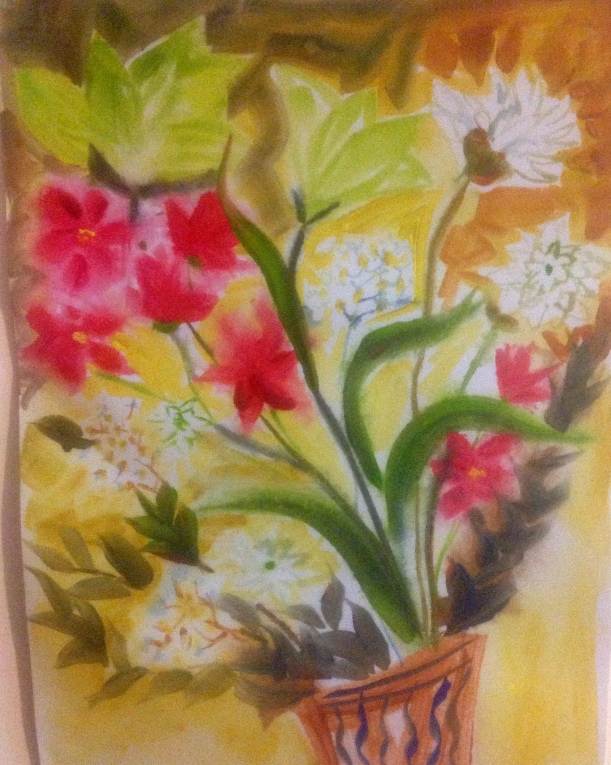